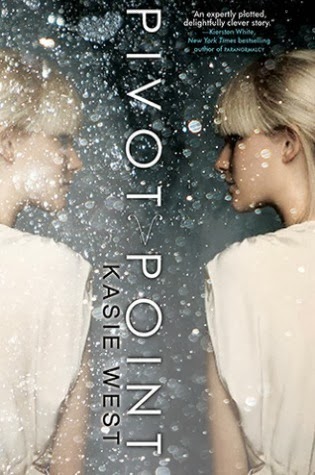 As soon as I seen this book, I knew I had to get my hands on it. However, it sat on my shelf for far too long...

I actually decided to read it when I got an ARC in the mail of the second book. Once I started reading it though, I was like WHY DID IT TAKE ME SO FLIPPIN' LONG TO READ THIS?! It was SO good! I was familiar with Kasie West, but had never read anything by her, so I wasn't sure what to expect with Pivot Point. It's now safe to say I love Kasie West and her writing style is amazing and easy to read. I really felt like I got into the mind of Addison, the main character.

In Pivot Point, Addie has the ability to see two futures based on choices she is given. Kasie West did an AMAZING job in this novel! We get to see BOTH visions of both paths of her future. Each chapter took turns telling what happened in one path and then the other. It all flowed so well, that after a couple chapters I didn't even think about it anymore.

I've never read a novel that had done this before. It made it that much more amazing. I loved Addie, she wasn't one of those characters that asks or thinks a bunch of stupid questions even though the answer is right in front of them. She wasn't one of those type of characters that would go into a basement knowing full well she shouldn't be going into the basement because you KNOW there's something down there. Know what I mean?

She knew how to think for herself, and was able to figure things out like a normal person, which I really liked. I'd be reading and be like "why wouldn't you think of this?" or something, and she WOULD! *Mind Blown*! Finally a character who isn't totally or partially stupid, who actually has some brains!

I also really liked Trevor, one of Addie's love interests :") Yuummmmmm..He was the perfect mix of brains, hot and sweetness and totally perfect for Addie.