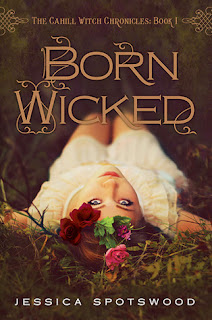 Everybody knows Cate Cahill and her sisters are eccentric. Too pretty, too reclusive, and far too educated for their own good. But the truth is even worse: they’re witches. And if their secret is discovered by the priests of the Brotherhood, it would mean an asylum, a prison ship—or an early grave.

Before her mother died, Cate promised to protect her sisters. But with only six months left to choose between marriage and the Sisterhood, she might not be able to keep her word... especially after she finds her mother’s diary, uncovering a secret that could spell her family’s destruction. Desperate to find alternatives to their fate, Cate starts scouring banned books and questioning rebellious new friends, all while juggling tea parties, shocking marriage proposals, and a forbidden romance with the completely unsuitable Finn Belastra.

If what her mother wrote is true, the Cahill girls aren’t safe. Not from the Brotherhood, the Sisterhood—not even from each other.

I can already feel a book hangover coming on, this book was SO amazing. I've read a few novels about witches, but none quite like this one. I just loved it from beginning to end! The story is so original and different from a lot of things I've read, and was set in the 1700s, I think (can't quite remember). It was almost historical meets modern, in the sense that it had a historical-type setting, but the mind set of Cate and her sisters were very modern day teenager.

I honestly didn't expect to like it as much as I did. The author did an amazing job of mixing all these different elements together to make one big amazing novel. Cate is the main character, who looks after her 2 younger sisters, Maura and Tess, and all 3 are witches who could very well be the 3 sisters the prophecy talks about. One of the problems is that this "Brotherhood" has been in power the last few decades and they are very much against witches and anything to do with them, so Cate and her sisters must be extremely careful so they don't get caught and become one of the disappearing girls that no one ever hears from again.

Slowly, secrets about their nice little hometown begin to unravel, some of the secrets more shocking than others, but all of them strung together just enough to keep the story going and keep you intrigued. I know I was. Then of course there's the romance, and boy did Finn make me swoon! First I was all about Team Paul, Cate's childhood BFF, but my my my, Finn proved to be THE boy Cate HAD to marry! Unfortunately things got in the way before they could even announce their betrothal. I think I was more torn apart by this than Cate was! I'm still crying a little inside right now..

Lately I have found that I will love a book, but I won't be fully in love-need-the-next-book-now-before-I-tear-someone's-eyes-out, but this book was one of those. I NEED THE NEXT BOOK NOW! I can't leave Finn behind while Cate...leaves..(trying very hard not to give anything important away!!). Born Wicked tops any other witch book I've ever read, and that's saying something since I loved Cate Tiernan's sweep series growing up! I highly recommend everyone to read this book, it's amazing.

Posted by JessicaRaexox at 18:41 2 comments