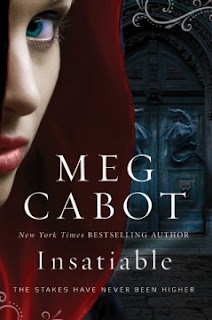 Rating: ♥♥♥
Not that Meena isn’t familiar with the supernatural. See, Meena Harper knows how you’re going to die
But not even Meena’s precognition can prepare her for what happens when she meets—then makes the mistake of falling in love with Lucien Antonescu, a modern-day prince with a bit of a dark side.. a dark side a lot of people, like an ancient society of vampire-hunters, would prefer to see him dead for.
The problem is, he already is dead. Maybe that’s why he’s the first guy Meena’s ever met that she could see herself having a future with. See, while Meena’s always been able to see everyone else’s future, she’s never been able look into her own…
Meg Cabot is one of my most favorite authors, has been for a pretty long time, ever since I read 'The Mediator" a few years back. BUT. She, I guess you could say, flunked a bit on this one. I was pretty disappointed, she could have made it SO much better. All the main characters share their view point from chapter to chapter and at first it's hard to follow and not much goes on. The only thing I really liked about it was that Meena and Lucien have this amazing passionate romance for a period in the book, but otherwise, it's just..meh. The characters don't feel very structured, the story just feels a little all over the place and Meena is a freaking cry baby that cries over every little thing. Let's just say I'll be getting the sequel 'Overbite', from the library.

Posted by JessicaRaexox at 18:20 0 comments