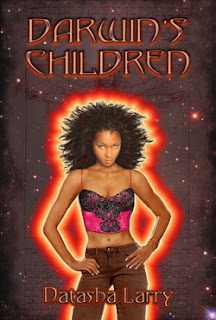 For review from the author, I have Darwin's Children and Unnatural Law. Big thanx to Natasha Larry!


Life can get pretty complicated for any seventeen-year-old girl, but for a home-schooled telepathic black girl trying to survive in a prestigious private school in small-town Jonesborough, Tennessee, it can be maddening; especially when her telepathic father keeps eavesdropping on her thoughts!
Jaycie Lerner's family isn't the usual mom-dad-kid setup. Jaycie's mom is MIA, but Allison, her personal live-in trainer, is more than a mom, with her own special abilities, like being able to lift cars and run incredibly fast. And Jaycie's godfather John is more than persuasive; he can literally convince anyone to do anything. As far as the rest of the world's concerned, Jaycie's on the outside looking in. The townsfolk love Jaycie's paediatrician father, but she doesn't fit in with "normal" kids, and she doesn't really want to. Most of her free time is spent training to keep her telekinetic and telepathic powers under control. But there's one thing she can't control; and that's her feelings, especially when her best friend Matt is nearby. If only he knew what she was truly capable of... 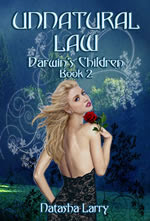 Release date and page info currently unavailable What It's About!


Seventeen-year-old Jaycie Lerner’s psycho-kinetic power surge is over, and her astounding powers are under control for the time being – sort of. As she struggles to maintain her humanity in the face of the awesome terror and responsibility of her abilities, she also yearns for the chance at a normal life – and a relationship with Matt Carter, the best friend she had to leave behind. But Matt’s got a few tricks up his sleeve, and he’s not about to give up on his feelings for Jaycie.
As Jaycie and her family grapple with the day-to-day routine of trying to keep their world together, Jaycie’s mother figure, Allison Young, endures a personal crisis of her own. The superhuman blonde possesses the physical equivalent of Jaycie’s awesome psychic power.
So evolved, at ninety-two she still looks twenty. But what good is extended life when everyone else around her is so fragile? With no one to share her unusual life, she’s a uniquely lonely woman yearning for the romantic love she sees all around her. But in a dream she gets her wish – and it quickly turns to a nightmare for everyone else in her life. The memory of a rose is all she can hold onto in the storm of obsession that nearly sweeps her away.
Things quickly turn deadly for the vampires, but the Dey-Vah Guard fairies refuse to acknowledge there’s an imbalance in the nature they protect. As the danger gets ever closer to Jaycie and her family, the race is on to find answers before a secret plot can destroy them

Posted by JessicaRaexox at 15:37 0 comments 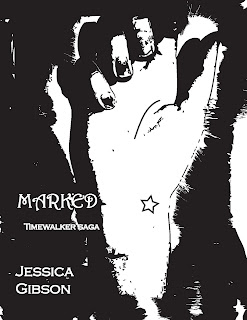 Marked by Jessica Gibson is a paranormal romance about a woman named Jilly and her best friend Emily. They're both witches who run a hair salon, and help people by making protection charms from potions they make. One day out of the blue, William shows up at the salon and it's almost instant attraction between him and Jilly. Then Jilly starts to have these weird dreams that she finds out later are actually memories someone is sort of putting her in so she can see the parts of the past someone wants her to see. William is a Time Walker, he is immortal and has lived for a couple hundred years. He starts to trust Jilly and tell her a bit of his background, and it seems as if Sabine, another Time Walker from his past, has some alternative motives..
The story has very good potential, and a very good story line, but it feels like we are not given enough background information about the characters. On the first page, the story plunges right in, and just keeps going. Some books have too much explanation in them, but this one doesn't seem to have any, really. As you read through the story, you start to understand the characters by how they act and what they say, but that's really all there is to go on. Jilly is the most hardest character to get to know, I think. You see everything from her point of view, but she never really explains who she is or how her and Emily's salon got started or nothing. She talks out loud to herself a lot, where as most characters just think it in their head. This drove me a little crazy lol. I really wanted to like this book but there's just not enough to go on, I feel like I'm always missing something, like the characters know something I don't I guess. Overall, it is a pretty good book but it could have more stuff to build it up a little bit instead of diving right in and leaving the reader hanging.

Posted by JessicaRaexox at 11:13 0 comments