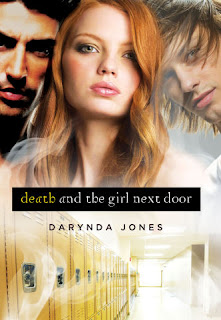 Cover Reveal: Death and the Girl Next Door by Darynda Jones


Things get turned upside down for sophomore Lorelei MacAlister when the Angel of Death starts high school in her small town. What she doesn’t know is that she has been slated to die. It’s simply her time. And Death has been sent to do the deed. But when she touches him, when she peers into his eyes and reaches into his heart, he realizes she is more than what he was led to believe, and he disobeys his orders. He brings her back from the brink of death when he was supposed to push her into it. Because of this, he gets trapped on this plane. And that’s when all hell breaks loose. Literally.

Posted by JessicaRaexox at 20:09 1 comments