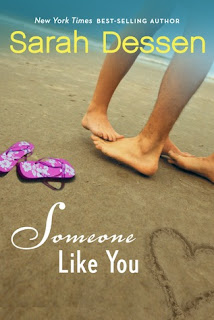 
Halley has always followed in the wake of her best friend, Scarlett. But when Scarlett learns that her boyfriend has been killed in a motorcycle accident, and that she's carrying his baby, she's devastated. For the first time ever, Scarlett really needs Halley. Their friendship may bend under the weight, but it'll never break--because a true friendship is a promise you keep forever.

Sarah Dessen is one of my favorite authors and she never lets me down. I've had this book sitting on my shelf for (literally..sadly..) a few years, and I just now read it. I've read most of her other books except for one or two. Someone Like You turned out to be one of my favorites out of all her books, and that's saying something, considering how much I freaking love her other books!

Someone Like You isn't totally what I was expecting. I guess I expected to be more like the cover (silly me!) but it was still really good. As with most of her books, the main character, Halley, went through a couple life lessons that she definitely had to learn the hard way. One she learned through her best friend, but others she learned for herself. Like the "amazing" Macon, her new boyfriend. Ya, he turns out to not be so amazing. It was totally predictable, but so relate-able too, since it seems like every girl has to go through the experience with that One Guy, you know, the one that's a total jerk and everyone but you can see it? And of course your parents hate him but you just like him so much you can't listen to anything anybody says, therefore finding out the hard way he's not who you thought he was. Well, that's what happens to Halley. I felt like I went right through that experience with her.

While that little drama was unfolding, Halley's best friend Scarlett is going through a pregnancy, and her boyfriend died right at the beginning of the book so she goes through the whole thing alone, with Halley. So we pretty much get to know Scarlett's boyfriend through her, in a way.

This book really tugged at my heart, with everything Scarlett and Halley go through. Especially the way Halley got crushed after Macon turned out to be such a jerk. It wasn't as slow as I was expecting it to be. It really pulled me in, made me feel everything the characters were feeling and I just loved it. It was the perfect summer novel. By the end I was practically in tears, it was just so beautiful. Everything came together so well at the end. It even ended pretty nicely for the characters. It's for sure a must-read if your a Sarah Dessen fan :)

Posted by JessicaRaexox at 17:27 5 comments