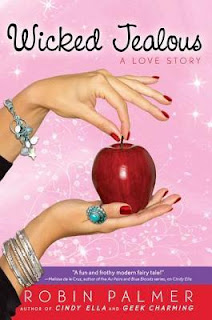 Simone never saw herself as the “cute girl”—she was always the chunky, band tee wearing, France-obsessed smart girl. But now that Simone’s a few pounds lighter and sporting a new retro style, things have gotten, well, weird. Her crush Jason seems to actually know she exists. And when Simone’s soon-to-be stepmonster Hillary stops ignoring her, Simone knows something is up. When Simone’s brother offers to let her move in with him and his six roommates on the beach for the summer, Simone jumps at the chance. But living with seven very different college boys isn’t exactly helping her land her very own happily ever after.

ARC was provided by Penguin Canada

I haven't had much time to read lately, but this book has been one of the few that has gotten onto my summer reading list so far. It was a highly enjoyable, good summer read. When I had first started reading, I my first impression of Simone was that she was this wimpy, overweight girl that would do nothing for herself. Actually though, she took control of her life, and her bad eating habits and did something about it.

Simone wasn't the only character we got to know. We also got to know bitch Hillary, her dad's new 28 yr old girlfriend with a BAD case of jealous-bitchitous. She did everything she could to ruin Simone, and I do mean in the literal sense. Hillary was well aware of the fact that Simone was deathly allergic to apples, so she would constantly "forget", always trying to shove some kind of apply thing down the poor girl's throat. While I hated Hillary, she did make a good character, and helped add some juicy drama to the story. Then there is Nicola, Simone's BFF/wingwoman, the 7 college guys she meets when she moves in with them and her brother, and Jason.

Jason was your typical jock-just-wanna-get-in-your-pants type jerk, who she falls for, for a little while, until she starts to realize what he's really into her for, and ends up realizing who was there for her all along even when she didn't quite know it yet. I was SO glad she actually had a brain and knew how to use it when it came to Jason, even if it took a little bit for her to get there.

I loved the way the book ended, it was a perfect ending. Hillary got what she deserved all along, Simone ended up with the right guy AND got her dad back on track, and a few other pretty good things brought the story to a close. Wicked Jealous is definitely a book to go on your summer reading list, if your looking for a light, fun, easy read to read on the beach or just out in the sun.

Posted by JessicaRaexox at 13:34 0 comments