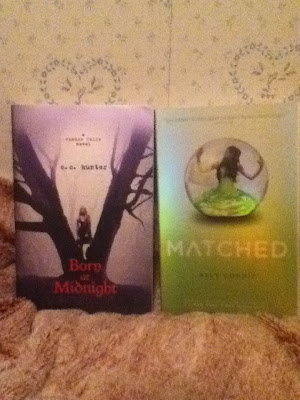 Picked these up at the bookstore today, I couldn't help myself! I was gonna buy them off the book depository, but I couldn't wait forever for them to come in the mail..lol Once I get my review request books done, I'll start reading these! :)
Born At Midnight by C.C. Hunter (Shadow Falls #1)
Don’t miss this spectacular new series that will steal your heart and haunt your dreams,  Welcome to Shadow Falls camp, nestled deep in the woods of a town called Fallen…
One night Kylie Galen finds herself at the wrong party, with the wrong people, and it changes her life forever.  Her mother ships her off to Shadow Falls—a camp for troubled teens, and within hours of arriving, it becomes painfully clear that her fellow campers aren’t just “troubled.”  Here at Shadow Falls, vampires, werewolves, shapshifters, witches and fairies train side by side—learning to harness their powers, control their magic and live in the normal world.
Kylie’s never felt normal, but surely she doesn’t belong here with a bunch of paranormal freaks either.  Or does she?  They insist Kylie is one of them, and that she was brought here for a reason.  As if life wasn’t complicated enough, enter Derek and Lucas.  Derek’s a half-fae who’s determined to be her boyfriend, and Lucas is a smokin’ hot werewolf with whom Kylie shares a secret past.  Both Derek and Lucas couldn’t be more different, but they both have a powerful hold on her heart. Even though Kylie feels deeply uncertain about everything, one thing is becoming painfully clear—Shadow Falls is exactly where she belongs…
Matched by Ally Condie (Matched #1)


Cassia has always trusted the Society to make the right choices for her: what to read, what to watch, what to believe. So when Xander's face appears on-screen at her Matching ceremony, Cassia knows with complete certainty that he is her ideal mate... until she sees Ky Markham's face flash for an instant before the screen fades to black.
The Society tells her it's a glitch, a rare malfunction, and that she should focus on the happy life she's destined to lead with Xander. But Cassia can't stop thinking about Ky, and as they slowly fall in love, Cassia begins to doubt the Society's infallibility and is faced with an impossible choice: between Xander and Ky, between the only life she's known and a path that no one else has dared to follow.

Posted by JessicaRaexox at 20:36 3 comments