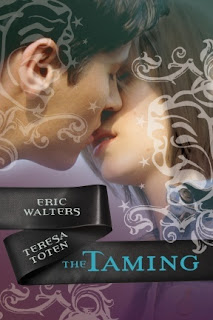 Katie likes to believe she's invisible. It seems much safer than being exposed as she is--shy, poor, awkward. So getting up on stage in the school production of The Taming of the Shrew should be complete torture. But as Katie tells it, something totally unexpected happened when she stepped on stage: "My head exploded. I loved it. Acting hit me like a sucker punch and I loved, loved, loved it! . . . Invisible Katie became visible Katharina."

Evan Cooper is, as they say, another story. He knows just what it takes to get noticed, and he uses every one of the skills he's honed after years of being the new kid. Like tossing the keys to his father's high-end Audi to a kid he's never met, first day of school. "I have insurance for car theft," he explains to a shocked Danny. "And there's a full tank." An abuse of the power that comes with privilege and money? Sure.

But more dangerously, is his romance with Katie another version of the same thing? Or is it the real thing?


A copy was provided for review from Netgalley

Honestly, the best part of this novel is the cover. I have to admit, I was expecting a little more than what it gave me. I love when I can sink into a book, and get lost in it for a while. Unfortunately, The Taming just wasn't for me. I liked the idea of the story, and thought it sounded like it could be really good, but I just couldn't get into it. After I read the first 4 or 5 pages, I lost interest and didn't read it for about a month.

What kind of confused me, was how Katie went from super shy, invisible girl, to this stage queen in 2.2 seconds. I think if we, as readers, had been introduced to Katie as the shy girl and were able to watch her slowly grow from shy to outgoing, it would have been more understandable, instead of someone flipping a switch and BAM, she's changed. With Evan, I felt like he was too unrealistic. He was definitely not what you would expect of a 17 yr old. Neither of them were very easy to relate to, and I just didn't really care for them much.

This was just one of those books I read, but couldn't fully grasp what was happening, so many things felt like they were rushed and hurried and all over the place. Other parts weren't so bad. I found myself having to re-read a few paragraphs because I felt my mind wondering instead of being in the story. It just couldn't hold my attention for very long. I'm actually kind of amazed I managed to finish it.

Posted by JessicaRaexox at 16:50 2 comments