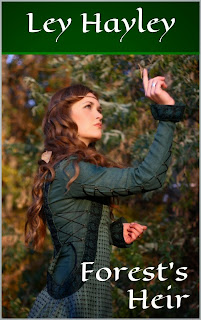 Forest's Heir was self-published by the author, Ley Hayley, and is currently available for purchase on Amazon.

Seventeen year old Rosalind Rowan was born a princess, the apple of her father’s eye. She loves the thick forests and lush meadows of the Forested Land. She is sometimes selfish and reckless, but she is also kind and loves fearlessly. Rosalind—who is known to everyone but the Queen as Rose—is desperately in love with Gavin Ashford, the dashing and intriguing son of an important lord. She wants nothing more than to marry Gavin and live in a country manor, far away from court. Because once her older sister marries, Rosalind must take up the position of Regent of the Forested Land.
Rosalind discovers—in front of the King and his entire court—that she’s capable of powerful earth magic that only the rightful heir can do. Terrified and confused, Rosalind watches her relationship with her sister fall apart as whispers of what happened find their way out of the castle. As the time for her sister’s wedding draws closer, rumors of rebellion seep through the kingdom like a mist. When her older sister dies suddenly in her sleep, Rosalind is forced to take on a crown she never wanted. She sees her dreams of a quiet country life fall apart, but her love for Gavin never wavers.
Andrew Rivers, King of the nearby River Realm and the betrothed of Rosalind’s dead sister, comes to pay his respects to the dead princess. From the first time she sees him, Rosalind is strangely drawn to his charm and kindness. He quickly becomes a close friend to her, although his gaze hinted at more than friendship. Rosalind learns that her engagement to Gavin Ashford has been broken, and that she’s to marry Andrew Rivers instead. Heartbroken by the news and the feeling that Gavin has given up on her, Rosalind throws herself into learning how to run a kingdom. Her only support is Andrew Rivers, who shows her friendship and companionship as her world turns upside down. It’s against her will that she begins to love him.
When rumors turn into reality, Rosalind finds herself in the middle of a kingdom torn apart. In fear for her life, she must find someone to help her take back what is hers. In the end it all comes down to a single question: When the world falls apart, where do you find your strength?