So, since there's been so much talk and debate about the big "December 2012", I thought I'd post my thoughts on it, even though it's not book related. I've actually done a little research, too. I have to admit, ever since the last 2012 movie they did, what? 2 yrs ago, now? I have been just a little up tight (haha), even though I didn't really believe or understand it. 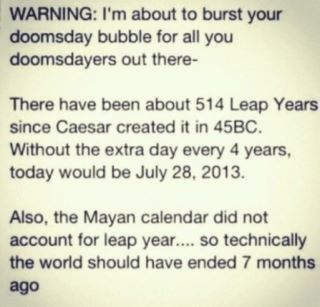 If you think about it, it's totally true, and makes a lot more sense!
I was actually watching a show the other day, about the Mayans, (it randomly caught my attention, hows that for fate.) and they talked about how all the Mayan writing and sculptures, etc. stopped. Actual Mayan researchers found a lot of the sculptures, writing, whathaveyou, unfinished. Like they just up and left...or did they?
No, they didn't. According to the show I was watching, a few of the researchers were starting to find clues as to what happened. It sounds like the Mayan civilization slowly started to overpopulate and starve. So, as with everything else they were unable to carry on making, they could no longer go on writing the calender. So the last day on the 2012 calender doesn't mean the last day of earth, it means the last day the Mayans wrote on the calender before they could no longer write it. 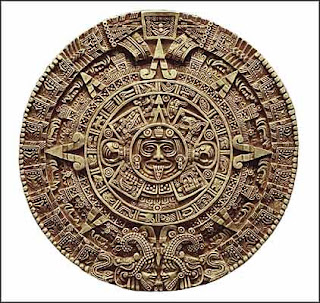 I love how people just automatically assume the worse. How do you know it wasn't a new beginning, and not an ending? It's actually the end of a 26,000 year period, and the start of a new Era, a new beginning, the start of another 26,000 year period. What are you afraid is going to happen on that one day, anyway? Natural disasters happen every day, somewhere on this earth, and most people live through them. One day is not gonna change anything just because it's the end of the calender.

I also think it's funny how the date changes from one website/show to the next. For the longest time, it was December 21rst/2012. Now I've seen/heard dates anywhere from May 2012 to December 2012.