The Catastrophic History Of You & Me Review 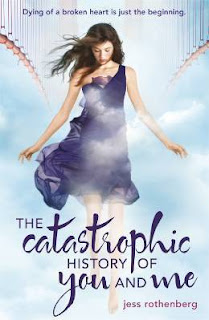 The Catastrophic History Of You & Me by Jess Rothenberg

Dying of a broken heart is just the beginning.... Welcome to forever.

BRIE'S LIFE ENDS AT SIXTEEN: Her boyfriend tells her he doesn't love her, and the news breaks her heart—literally.

But now that she's D&G (dead and gone), Brie is about to discover that love is way more complicated than she ever imagined. Back in Half Moon Bay, her family has begun to unravel. Her best friend has been keeping a secret about Jacob, the boy she loved and lost—and the truth behind his shattering betrayal. And then there's Patrick, Brie's mysterious new guide and resident Lost Soul . . . who just might hold the key to her forever after.

With Patrick's help, Brie will have to pass through the five stages of grief before she's ready to move on. But how do you begin again, when your heart is still in pieces?

The Catastrophic History Of You & Me is about a girl who literally dies from a broken heart, and ends up in Heaven, where she meets Patrick. Little does she know, she already knows who he is, but it takes her the whole book to finally remember and come to the realization of who he is.

This book took me through about 4 stages of emotion. I started off laughing and really enjoying it because Brie's character was just so witty and funny and in a lot of ways I could relate to her. Then once I got further into the book, I started to get annoyed/bored. Her personality started to get old, and her dumbness was just getting to me. So many things were so obvious I just wanted to jump into the pages and strangle her. Brie was so self-centered and never listened to what Patrick was trying to tell her. Then close to the end I was a happy-sad because of the little bit of romance story that was near the end but actually started at the very beginning of the book, it just wasn't totally obvious until I got near the end of the book. Then by the very end I was practically in tears it was just so beautiful.

Brie started out as a really annoying, typical teenager (even though I thought she was funny at the same time in the beginning), but throughout the book she really grew as a person. She slowly started to understand things and people in a new way that she never had before. By the end she was the total opposite of the annoying, full of attitude teenager and finally accepted and understood the world and stopped putting herself first. That was one of the things I really liked about this book. The other thing was the love story between Brie and Patrick, how he had always been there for her even when she didn't know it and had given her a second chance even though it meant he was never going to be able to move on for all eternity.

By the time I finished the last page, it really tugged at my heart strings, so I decided to give it a 4/5 stars instead of the 3 I was originally going to give it.

Posted by JessicaRaexox at 00:25 0 comments