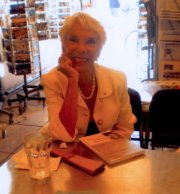 “I stand three feet six inches tall when I am declared an enemy of the German state...”

In 1939, little Sonia Korn and her family were given a grim option; either they must find a way to leave Germany on their own, or be deported. After a perilous escape to the Belgian border, after getting caught in the chaos and carnage of war-torn France and Belgium, Sonia lived with her family in the shadows, fleeing and hiding from persecution until she was placed in an orphanage in 1942. There she lived with more than 20 other Jewish children, all hidden in plain sight disguised as Catholic orphans, and all kept near starvation by the corrupt proprietress.

Sonia forged triumph from these tragedies with unshakable tenacity and beguiling charm, a life chronicled in the new book Sonia’s Song.  From her humble beginnings of singing daily mass in the orphan choir,  after the war Sonia became an international sensation of radio and television, singing to the delight of audiences throughout the world. Sonia became a champion of women’s rights, a French tutor to a Queen, and was named Chevalier and Officier by the French Government for her contributions to French culture.

I am honored to chat with Sonia Korn-Grimani, and talk with her about her writing process for her book Sonia’s Song.

Q: Thank you so much for taking the time to do this interview with me, Sonia.  How long did it take to write Sonia’s Song?

SKG: I wrote 3 versions of Sonia’s Song, first in German, then in French and then in English. It took me about 8 years.


Q: What made you need to write it?

SKG: I wrote this book for my children, grandchildren and husband, so that the memories will last forever.


Q: What was your writing process like? Was it difficult to bring all of these memories back to life?

SKG: I found myself still tormented by my past as a little girl. Finally, I forced myself to write it all down. I locked myself in my room for weeks and just wrote. It was very difficult to put these memories down on a blank sheet of paper, and I was anxious not to forget anything of my family’s and my own journey.  It was a painful process.

Q. Were you inspired by any other memoirs or authors?

SKG: I was particularly inspired by The Diary of Anne Frank and more recently by Sarah’s Key by the French author Tatiana de Rosnay.


Q. Do you have any advice to aspiring authors?

SKG: My advice to aspiring authors is that no matter how difficult it is to sit down and write, each of us has unbounded potential to transcend the most formidable of obstacles!