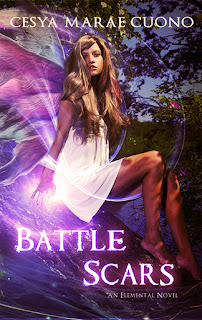 
What It's About!
How do you carry on fighting for your family when you’re left scarred and broken? When your dreams are plagued by nightmares, how do you strengthen the armor needed to protect yourself again? Callie’s been defeated by the loss of her entire family. With the help of old and new friends, will she build her battle armor up and fight the evil hands of the Demons who threaten to destroy her new home? Or will her battle scars leave her too broken and empty to fight?


Elemental Reality-Book #1 in the Elemental series
When Callie Pierce was ten, her mother disappeared without a trace. On the eve of her disappearance twelve years later, the Earth seemingly comes alive. The elements speak to Callie, and that's only the beginning. Everything she has ever known was a twisted fabrication to protect her. Now the truth is set free. Callie and her sister are more powerful than any Faerie ever born. Now they have to use their powers to save their mother and family from the evil hands of fate that threaten to tear them apart.
Welcome to her elemental reality.