The Summer I Turned Pretty Review 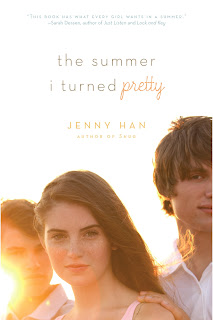 Rating: ♥♥♥♥♥
Belly measures her life in summers. Everything good, everything magical happens between the months of June and August. Winters are simply a time to count the weeks until the next summer, a place away from the beach house, away from Susannah, and most importantly, away from Jeremiah and Conrad. They are the boys that Belly has known since her very first summer--they have been her brother figures, her crushes, and everything in between. But one summer, one terrible and wonderful summer, the more everything changes, the more it all ends up just the way it should have been all along.
I read this book in just over a day, it was SSOOO good, such a nice break from all the paranormal stuff I've been reading lately! Belly is such a down-to-earth girl and I could totally relate to her. I think that's pretty much how every girl feels whenever the boys decide to leave you out of everything! At first I really wanted her to be with Conrad, but then he was always so moody and distant I got tired of him before she did. Then the other guy from the bonfire comes along and I'm all like YAY but he doesn't last very long and he doesn't seem to really suit Belly's life. When we find out her mom's bff has gotten sick with cancer again, and this could be her last, I seriously balled my eyes out. I was so caught up in the story and everything felt so relate-able, it's a really incredible and enjoyable read.