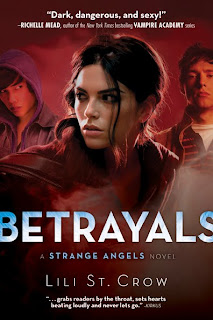 Poor Dru Anderson. Her parents are long gone, her best friend is a werewolf, and she's just learned that the blood flowing through her veins isn't entirely human. (So what else is new?)

Now Dru is stuck at a secret New England Schola for other teens like her, and there's a big problem - she's the only girl in the place. A school full of cute boys wouldn't be so bad, but Dru's killer instinct says that one of them wants her dead. And with all eyes on her, discovering a traitor within the Order could mean a lot more than social suicide. . .

Can Dru survive long enough to find out who has betrayed her trust - and maybe even her heart?
I have to say, Betrayals kept my attention way better than Strange Angels did, I don't know why. I kind of like how in this book, Ash seems to be trying to protect Dru, and not kill her like in the first book, same with Christopher, I'm starting to like him more and more. Graves is still my favorite though. I kind of felt that Graves wasn't totally with it though, since him and Dru arrived at the new school and Graves has been making friends, it's like he's not there for Dru in the way he was before, but he's still trying, but somethings different. The characters definitely come more into their own, relationships are tested and secrets are discovered.