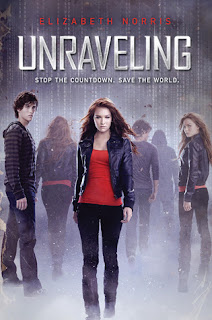 Two days before the start of her junior year, seventeen-year-old Janelle Tenner is hit by a pickup truck and killed--as in blinding light, scenes of her life flashing before her, and then nothing. Except the next thing she knows, she's opening her eyes to find Ben Michaels, a loner from her high school whom Janelle has never talked to, leaning over her. And even though it isn't possible, she knows--with every fiber of her being--that Ben has somehow brought her back to life.

But her revival, and Ben's possible role in it, is only the first of the puzzles that Janelle must solve. While snooping in her FBI agent father's files for clues about her accident, she uncovers a clock that seems to be counting down to something--but to what? And when someone close to Janelle is killed, she can no longer deny what's right in front of her: Everything that's happened--the accident, the murder, the countdown clock, Ben's sudden appearance in her life--points to the end of life as she knows it. And as the clock ticks down, she realizes that if she wants to put a stop to the end of the world, she's going to need to uncover Ben's secrets--and keep from falling in love with him in the process.

Unraveling was a great novel as the first in a series (or trilogy). Within the first few pages, we are introduced to Janelle, who ends up getting hit by a truck and Ben, a boy she doesn't know but recognizes from school, brings her back to life. This is just the beginning of several mysteries that all start linking to one big huge mystery, that becomes not so much a mystery by the end of the book.

Elizabeth Norris is definitely NOT afraid to kill off her characters. Maybe even main ones. Main ones THAT YOU LOVE FROM THE BEGINNING AND THEY DIE AT THE END. And there's no bringing them back once they're gone. How come Janelle can be brought back but no one else? Don't know. I'm assuming this will be another mystery touched on in the second book, which I am now dying to get my hands on!

A good first quarter of the book was pretty slow, seemed like a lot of filler, until you get a little further into it, and then things really start picking up and the book gets really eventful. One of the things I found a little different, was the way the author would have something going on, but then the chapter would end in the middle of whatever was happening and then the next chapter would be of some flashback or memory of Janelle's..like the kind of information that let's you get to know a character or characters better, but that sort of thing is usually all at the beginning, not scattered throughout the whole book.

Most of the chapters ended with some sort of cliffhanger and I was constantly sitting on the edge of my seat, it was so packed with really interesting events and problems the characters had to go through. It was SO good. When I got to the very end, I wanted to just throw the book out the window and crawl into a ball and die. The author strung my heart along and then ripped it out (you'll have to read it to understand why). If you even just LIKE sci-fi books, you'll definitely have to at least give this book a try. It reminded me of Fringe, the tv show, so if you like Fringe you might have to read this book too ;)