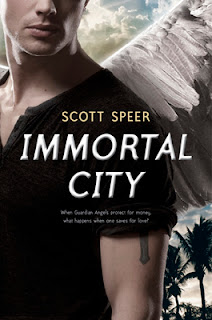 ♥Wishlist Wednesday♥ is every Wednesday, I will post a book or two that I have on my wishlist. This week it's Immortal City by Scott Speer, which was released April 3rd/2012. I've been seeing this book around on the blogspere and now I really wanna read it! I hope it's as good as it looks.


Jackson Godspeed is the hottest young Angel in a city filled with them. He's days away from becoming a full Guardian, and people around the world are already competing for the chance to be watched over by him. Everyone's obsessed with the Angels and the lucky people they protect - everyone except for Madison Montgomery.