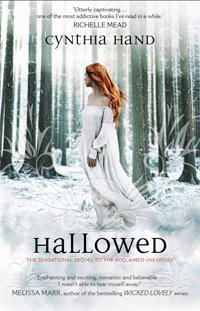 
For months part-angel Clara Gardner trained to face the raging forest fire from her visions and rescue the alluring and mysterious Christian Prescott from the blaze. But nothing could prepare her for the fateful decisions she would be forced to make that day, or the startling revelation that her purpose—the task she was put on earth to accomplish—is not as straightforward as she thought.

Now, torn between her increasingly complicated feelings for Christian and her love for her boyfriend, Tucker, Clara struggles to make sense of what she was supposed to do the day of the fire. And, as she is drawn further into the world of part angels and the growing conflict between White Wings and Black Wings, Clara learns of the terrifying new reality that she must face: Someone close to her will die in a matter of months. With her future uncertain, the only thing Clara knows for sure is that the fire was just the beginning.

SO heart-wrenchingly, tear-jerkingly, beautiful! A few things happen in this sequel to Unearthly. Clara has to make a choice between Tucker and Christian, I started out as Team Tucker (totally sweet, gentle farm boy), and by the end of the book, I became Team Christian. He's just a better fir for her, they're both angels, etc. A loved one dies, but Cynthia Hand makes it so beautiful and graceful (much as you can, when someone dies), secrets, questions and loose ends are tied up, and discovered. A few new characters are introduced to us, and one is not so new, but totally unexpected. We're also shown a bit of a different side of Samjeeza, the black wing, and Jeffery as well.

Clara grows up a lot, and finds out who she truly is. She has to choose between Tucker and Christian, but really, it's not much of a choice, it's more following of her destiny than anything else. I was not at all surprised by the choice she made.

I absolutely loved Hallowed, but it didn't quite have as much magic as Unearthly did. You will not be able to help but cry though, I teared up so many times, some of the moments are so powerful. I especially loved Angela's Grad speech at the end, very powerful and amazing. I love the way Hallowed ended, so touching and beautiful.