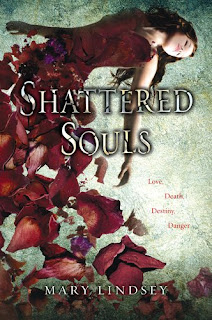 A thrilling debut story of death, love, destiny and danger

Lenzi hears voices and has visions - gravestones, floods, a boy with steel gray eyes. Her boyfriend, Zak, can't help, and everything keeps getting louder and more intense. Then Lenzi meets Alden, the boy from her dreams, who reveals that she's a reincarnated Speaker - someone who can talk to and help lost souls - and that he has been her Protector for centuries.

Now Lenzi must choose between her life with Zak and the life she is destined to lead with Alden. But time is running out: a malevolent spirit is out to destroy Lenzi, and he will kill her if she doesn't make a decision soon.

I loved this book so so SO much! I really hope Mary Lindsey and her publisher DO decide to write a sequel. I don't think Alden and Lenzi's story is quite done yet! :) I can honestly say, I loved this book from the very first page to the last. Right away I was so drawn into the story and it's characters. Really though, there's only a few characters throughout the whole book, a lot of books feel like they have more than a few. This was what helped make the story SO good! That, and the simple, descriptive writing that gives you just enough detail to understand what's going on, but doesn't drag it out.

This book had such a nice pace to it, I never found myself trying to get through a sticky part or nothing. Lenzi is such a likeable character, especially towards the end, when she starts to really embrace herself and know who she is. Alden is probably the best dreamiest guy book character I've ever read about. Zak was just a pain in my ass most of the time, but at the end, when he shows up, I was a bit surprised, especially when he seems to grow up a little bit, moments before he moves on.

I know a lot of people would probably read the blurb about this book and think it's just another ghost novel, but it's sssooo not. It's so much better! It's got your tragedy, romance, ghostly encounters and so much more. I would definitely say it's one of THE BEST books I've EVER read. If you pick up Shattered Souls, you won't be disappointed!